How is This My Match, Boobs Edition 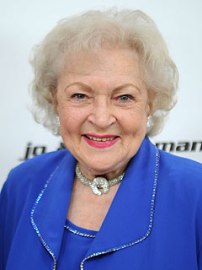 If only she Internet dated…

I have learned over time not to mince words in my profile. Initially I focused on being  funny and well-rounded, trying to cast the widest net possible. So I’d make jokes, and list every interest I’ve ever had or conceivably might have again in the future. I believe at one point my profile listed “sneakers” as one of my favorite things, as if the one thing standing between me and true love was a common appreciation of comfortable footwear. But after a few years at the game, I wised up. My profile now contains the words “smart” and “funny” approximately 400 times. Even sentences where it doesn’t apply, like how far am I willing to travel to find a mate, I just answer with “Wherever the smart and funny people are.” It has helped, for the most part. I don’t get as many emails from people whose favorite show is Two and a Half Men, which is nice, and the amount of LOL’s, LMAO’s, and ROFL’s I’m forced to endure has decreased exponentially. OkCupid however has yet to entirely grasp what I’m looking for.

I mean seriously, How is This My Match?

I ask for smart and funny, and this is what they recommend… 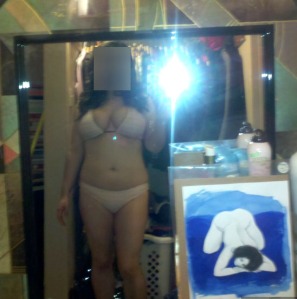 Maybe the left boob is named “Smart” and the right one is called “Funny?” Look, it’s not impossible that a girl who posts not one but two bikini shots in her profile is also smart and funny. But I wouldn’t say it’s super-duper possible either. Where they taken on the beach, perhaps. Posed in her weird nude library, probably not. I mean, if Tina Fey was on OkCupid, something tells me she wouldn’t lead with her rack. And if by chance she did wanna tit it up in a couple of photos, I doubt she would underline her point by posing in front of a mirror that was adorned with a drawing of a naked lady bending over. What exactly is that? “I want them to know that I’m into sex, but I’m not sure the candid bikini-in-the-living-room photo spread is sending that message. What do I do? I know! Let’s tape this crude drawing of a chick buying a one-way ticket to Bonetown over in the corner, just to make sure I’m not being too subtle. People are constantly telling me that I’m just too subtle!” Thanks, OkCupid, for finding exactly what I’m looking for.

But hey, it’s not really fair to judge someone based on only a couple of pictures. Let’s judge her on profile instead!

My Self Summary: I do not self-summarize.

I see. Well, I do not email people I know nothing about, so we seem to be at an impasse. A booby booby impasse.

I’m Really Got At: Many Things.

If only self-summarizing were one of them. 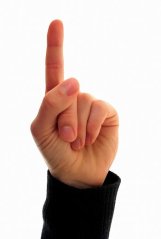 The number of interesting things I’m asking you to say. And still, I’m asking too much.

The Six Things I Could Never Live Without: My list expounds beyond 6 items and changes often. For the sake of posterity, I won’t bother to list it.

You Should Message Me If… “Dorks”, go away. That goes for you too, pseudo-“nerds”, who have never so much as cracked open a book, but who often have cracked open their ass for unknown, though potentially, gay reasons.

I’ve nothing against gays and find them to be wonderful people, but hipsters–you have to admit, those assholes are fags.

Really, because it kinda seems like you do have something against gays. I mean, people who like gay people don’t usually use “fag” as an insult. It’s quite a feat though, pulling off confusing and vaguely homophobic simultaneously in a profile that’s meant to seem attractive. And anti-intellectual, to top it all off. Are you an OKCupid dater, or a villain in a John Grisham novel? Because you’re checking all the boxes. And yes, all of those boxes add up to one thing and one thing only: smart AND also funny. Thanks, Internet dating. You’ve done great work as always.

I mean seriously, How is This My Match?!

Have a question, comment, or horrible story for It’s Not a Match? Email us here!

13 Responses to How is This My Match, Boobs Edition