When You Don’t Want To Admit You Met Online…

The last living person who is weirded out by Internet dates.

“But where will I tell people we met?” I get that one all the time, from friends, from dates, from you guys. For some reason it’s everyone’s biggest concern: if I find some great while online dating, how will I admit to the people in my life that I met them there? To which I respond, “are the people in your life from 1982?” Who still feels weird about Internet dating? If everyone you hang out with is 90 years-old, then I totally understand your reluctance to come out as a Match.com’er. But otherwise, I’d be proud of your story. Honestly, meeting the love of your life on a website is pretty damn romantic. That union had a lot to overcome: a sea of crappy emails that were mostly cut and pasted, countless weird winks from people who look like sex offenders, profiles that don’t even make sense to the people who wrote them, and date after tedious date with people who were so much funnier on email. If you can wade through all that nonsense and find someone you truly care, then I think you should tell everyone you meet. Even ones who don’t even ask. “We’ll take two grande hazelnut lattes, and…I’d like you to know we met on OKCupid. Yeah, that’s right, the place with all the lunatics.”

But apparently my little motivational speech hasn’t been working, because people still want answers. So I’ve put together a list. Here are some options of what to say when you’re asked where you met your Internet lover. (Note: never ever use the phrase “Internet lover.”)

1. We Met in a Bar. You can use this one, it’s totally standard and unless one of you is alcoholic or agoraphobic, it’s entirely credible. But here’s the problem: it requires a lot of backstory. As an example, just imagine your most annoying Aunt saying the following:

“Oh, you met in a bar. That’s nice! Did you come right up and talk to her? Were your nervous? What did you say? Did you buy her a drink? She likes to drink. Too much, I say. What did she have? Did you hit it off right away, or was it tense at first? I love it when it starts out tense. Like ‘You’ve Got Mail.’ Have you seen ‘You Got Mail’? How long did you talk? Was it love at first sight? Did you go home together? Naughty! When was your first real date? Have you been back to the bar? That would be romantic. I think men should be more romantic…” 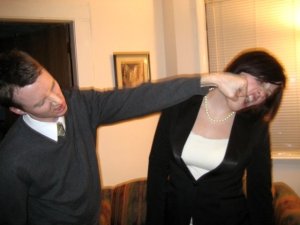 And then two hours later, after you’ve screwed up your fake story 25 times and are so bored you want the world to end, your only choice is killing the annoying Aunt to keep your secret safe. You don’t want to have to kill your Aunt, do you? Then come up with a better lie. The bar story leaves too many loose ends.

2. We Met in Line at Prison. A joke, obviously, and a joke just weird enough that no one will ask a follow-up question. Trust me.

3. I walked into a costume party and realized that he and I were the only two people dressed like Snow White. Hitler always said it was the biggest lie that was most likely to be believed. Psychologically, when we hear a big lie, we think, “oh, that’s so crazy, there’s no way they would ever make up something like that!” And whenever I need dating advice, I think to myself, “What would Adolf Hitler do?” Seriously though, if your story has conviction, a few details, and a little oddity it’ll be impossible for people not to believe. And in my experience, cross dressing – in the safe confines of Halloween exploration – checks all those boxes. Go for it.

4. We Met at Church. No one would lie about something that happened in a house of worship and devotion, right? And that’s exactly what makes it such an incredible lie! The only drawback is that if hell exists, you’re probably going there. And, I guess, so am I. See you soon!

5. It’s kind of a long story, do you have a few minutes…? There is no better way to get someone to stop paying attention to a long story than to announce, in advance, that they’re about to listen to a long story. You do that and you can tell ’em you met online, you met on Mars, you met online on Mars — you’re audience isn’t gonna hear a word of it. They’ll be nodding and laughing, but really just thinking about how to make their exit.

6. Actually, she rear-ended me at a stop light. Seriously, if you want real advice, and I imagine you probably do — just go with this one. Everybody loves a meet cute. Especially ol’ Aunty You’ve Got Mail back there. A funny little chance encounter that seems like the least the romantic thing in the world, but then spirals out into a bantery little tete a tete. It’s everyone’s dream come true. So, if you’re going to make up a story, why give people what they want to hear? You stopped short at a red light, and this crazy lady behind you banged into your bumper. You got out to argue, but then realized she was awfully cute, and no matter how angry you wanted to be, you just couldn’t resist her. You got her phone number for insurance purposes, but used it that night to call her and ask if she’d like to meet for a drink. “I’ll drive,” you said, “because I hear you’re a bit of a terror behind the wheel.” Come on, this shit writes itself. Go with a meet cute, and no one will ever dream you met somewhere as wildly uncute as Match.com.