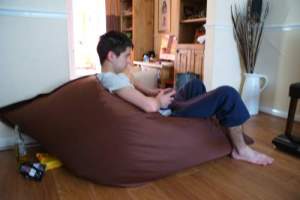 The "It's Not a Match" Board Room

We’ve gotten a lot of questions here at the It’s Not a Match offices (read: my couch) asking if the site can be used as a good dating ice breaker. Is it a fun topic of conversation, telling your date about a collection of expertly written stories that, while painting a negative picture of Internet dating, are crafted so skillfully that they remind readers of a young David Sedaris, or perhaps, Ernest Hemingway? My answer? I dunno. I’ve heard from readers that they’ve had success sharing my site and having a good bonding laugh at how ridiculous this all is, and hey, I’m always happy to have more hits, but I can’t vouch for it personally. I’ve only let two ladies in on my dirty little INAM secret, and neither were, shall we say, delighted. Turns out women aren’t thrilled with the notion that if things go poorly, they may have the disaster retold to hundreds of millions of eager followers. (I inflate the stats to get the ladies, you know, turned on.) Which is my anonymity, for now, remains. But by all means, folks, spread the It’s Not a Match gospel. I hope it treats you well.

A lovely email received by Jillian H in Boston…

Do you wrestle? Would you like to learn? I could teach you. 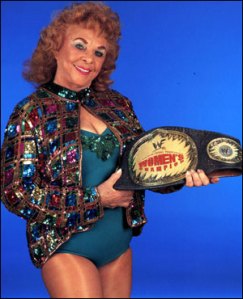 So short, so sweet, and so incredibly creepy. What woman wrestles? I mean, has anyone  ever answered his question, “Yeah, I totally wrestle. I was hoping you would ask!” And presuming she doesn’t, why would she possibly want to learn? From a weird guy she just met on the Internet? “You know, I don’t wrestle, because I’m a grown woman, and why would I really, BUT I’d love to meet up at a gym sometime, or perhaps your private home, just throw on a singlet and see what happens. Sound good?” I think, were I a single woman, allowing a strange man to teach me how to wrestle would be Top 3 least likely things for me to agree to. In fact, I’m a single man, and it’s still top 3. 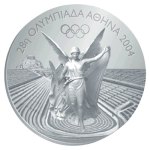 From Peter F in Houston…

Just when you think you have met a functional, self-respecting woman on Match, you soon learn the error of your optimistic thinking.

So, let me tell you the tale of Katrina, and the two Faustian terrors she called “children”. All of the pre-requisites added up. College educated, career, hot, witty and what appeared to be recent pictures.

She left out one TINY thing before we met, she failed to mention the recent brain surgery which left the left side of her face paralyzed and her left eye almost unable to blink.

However, she was funny, adored me and was a devil between the sheets. Her boys were described as a “handful” and “really attached”, but that was nothing new to me having dated other women with kids.

I might have gotten past the facial paralysis, as I didn’t consider myself that baby pool shallow. Might have I say, if that was the extent of her maladies.

So, against my better judgment, we dated, and here are the highlights:

1. Wake up next to her in the middle of the night and recoil because one eye is open and staring at you. Kind of like how Pipin found Gandalf that one time in the Return of the King. From then on, it became the Eye of Sauron but I never had the balls to tell her.

2. Finding out the hard way that her 7-year-old pissed in your new Johnston Murphys because “you didn’t bring him a Transformer again like the last time you came over.” Later that month, her 5-year-old mistook my laptop for a trampoline. She paid for both, so I wasn’t too mad.

3. Discovering she still bathed with her 7 and 5-year-old boys in the same tub together. 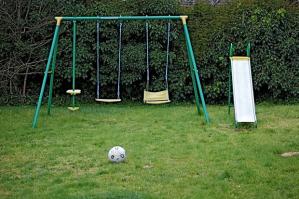 4. Having her casually explain why she blew her neighbor before we met in exchange for having the boy’s playset put together. For the record, she explained that was just “her body and sex” and “not her body and love” like she gave to me.

5. Showing up with classy, Cakebread Wine to impress her. Only to have it poured equally in two plastic Wendy’s cups, each chock full of nasty, refrigerator ice which smelled faintly of pizza and fish sticks.

6. Having to look at the Tramp Stamp or Trollop Postage in the likeness of her two boys every time she was on all fours.

Like all things, it came to an end. The aforementioned didn’t quite kill it believe it or not, but when she mentioned more kids, the relationship death knell rang. The ringing came in the form of me imagining our would be child’s likeness looking up at me while I plowed “mom” from behind.

The story is on steroids. It’s well written, funny, and totally crazy. Which makes me wonder…do I believe it? I believe it’s possible. God knows I’ve seen some crazy shit that is tough to believe. But can I say for certain it’s true? I can not. It’s almost too good. Like Barry Bonds good. I mean, recent brain surgery! So for now, you get the silver, Peter. 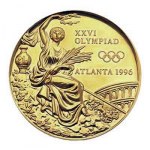 Written to Neva C., who’s screen name I assume starts with a P?

Orwell wrote, “At fifty, everyone has the face they deserve”, and you have a very provocative, mischievous, and sensual, one, so I thought I’d take a chance and write. I don’t know that Orwell ever commented specifically on lovely locavores who favour tight, sexy, tops, but I have no doubt that he would have found you very attractive ( you really do have a terrific smile, THE : largest, loveliest, eyes, and that scrumptiously fit, athletic, figure !!!!!!!!!!! ).

I’d like to think that I possess at least some of the qualities that you seem to be looking for ( I don’t wish to appear immodest, but on a good day I am a fairly bright and amusing fellow : ) You would find me an excellent conversationalist who can knowledgeably discuss an appallingly wide variety of subjects, and good company for your outdoor excursions, and in general. I am : creative, absurdly passionate, insufferably opinionated, fairly open-minded, and deliciously intense fun at nap-time !

I adore bright, unconventional, creative, women, and swoon over clever, libidinous, ones ; ) I know some terrific local beaches, there is an adorable puppy for you to play with, kids really like me and I just bought an old farm !

I’m sure you are curious about my face ( and figure ; ) as Wilde so cleverly put it, “Of course, only the superficial person DOESN’T judge by appearances” and of course having seen your images, reciprocity would only be fair.

(The gentlemen then attached a link to photos. I’ve seen them. Let me summarize as such…) 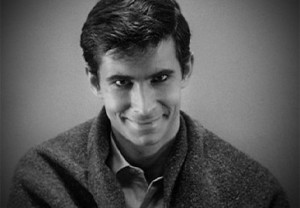 He’s not bad looking, just seems like the sort of guy you’d expect to be looking through a peephole into a woman’s hotel room. The email goes on, but I think you get the drift. And in case you didn’t, he writes her THREE more times. Without her ever responding. One was very brief, and featured only this picture. 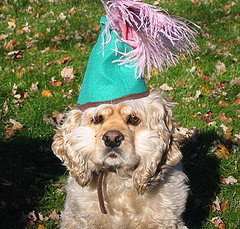 I get what you’re trying to do, dude, but stop. The poor dog. And yes, it’s cute. But it’s the sort of thing my grandmother would attach to the end of an email, not someone who I wanted to get it on with. Dogs in party hats might be humorous, but they are decidedly not sexy. NOT sexy.

And while you’re at it, sir, you may also want to stop writing annoyingly long lists, ending words with “in’ ” instead of “ing”, constantly quoting famous people, ever using the word “scrumptious”, and referring to yourself as “deliciously intense fun at nap time.” I don’t know exactly what that means, but I’m sure it’s gross.

Have a story that you think is award worthy? Send it to It’s Not a Match here!

This entry was posted in Internet Dating is Weird, Your Awful Stories. Bookmark the permalink.