INaM CLASSIC: The Girl Who Called Me Chip Boy

When people ask me for my strangest Internet dating story, Chip Boy is never far from my mind. It’s one of my favorites, and I wanted to make sure you had all seen it. I mean, it’s not everyday you get aggressively insulted by your date. Well, it kinda is everyday for me, but hopefully it’s new for you folks. Enjoy!

I bring a wide spectrum of winning qualities to each of my Internet dates. First of all, I blog, which is second only to swashbuckling on the List of Hobbies that Women Find Sexually Exciting. Second, I blog about my dates, giving women the rare chance to be humiliated not only during the evening itself, but afterwards on the Internet as well. That’s two potential disasters in one! Third, I am allergic to gluten, which not only sounds dorky, but means that I can almost never eat out and often ferret little snacks with me wherever I go. Fourth, I have a full body rash. Actually, I don’t, but you’d buy it after reading the rest of the list, wouldn’t you? I’m what they refer to in the dating world as a “triple threat,” meaning at least three different times during the date you will threaten to get up and walk away. But hey, I know my faults, and am more than happy to have a laugh at my expense. The trouble comes when my date starts laughing along with me, and pointing out faults I hadn’t yet considered. That’s when things can get ugly. Very, very ugly.

You wouldn’t email her?

Tami was a woman I put some effort into, partially because her profile made me laugh, and partially because she looked exactly like Connie Britton from Friday Night Lights. Whether those parts were evenly sized, I’ll let you decide. I first started emailing with Tami before she went on a long vacation, and when I sent the “have a good trip, let’s hang out when you get back!” email, I think we were both thinking, “yeah, right.” She was going to be in South America for a month, which in Internet dating time is equal to like two and a half years. You gotta strike while the iron is hot on Match, and after thirty days in the tropics, our iron was going to be cold, drained of water, and sitting on a table in a yard sale somewhere.

A month later, however, much to my surprise, Tami emailed and asked if I’d like to have that drink. A quick check of Facebook revealed that she did in fact still look like Connie Britton from Friday Night Lights, so I was in. We met, and immediately began breaking every first date rule I have. As you know, I recommend only two drinks on a first date – she had like six, and I managed three before getting totally smashed. I don’t have a rule about not letting your date totally outdrink you, because, well, I never really imagined it happening. I’m big and girls are small, and usually the roofies I put in their drinks hit them long before the alcohol does. After three cocktails though, I almost asked Tami how Coach Taylor was in the sack, so I switched to soda and my trusty water bottle. She did not. Also, Tami ordered food – putting this right on the verge of being a dinner date, something else I strongly forbid. Thankfully, because of my food allergies, I couldn’t join her in eating, which I explained to her in as ungeeky a way as possible. Dinner date rule intact! (One person eating is obviously just a snacking date.)Unfortunately, a few more rules would die on my first night with Tami. I smoked a cigarette, which is a habit so lovely that I try to save it for a bit further on in the relationship, just so she doesn’t get too turned on all at once. Also, we did some kissing, french-style, which I at least pretend to not want to do on first dates, so I can seem classy and reserved. All in all, it was an action-packed 4+ hour date, and I was sure it was the start of something memorable. As always, I was correct… 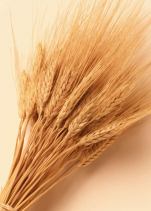 The face of evil

On our second date, Tami and I did drinks and a movie. We missed dinner, so during the film I snacked on some gluten-free chips I brought with me. Now I recognize that’s a little weird – bringing food into a movie date, but as I said earlier, living gluten-free requires you to become real weird real fast. At least 90% of things you would find in a convenient store or on a restaurant menu have wheat in the them, so you have to fend for yourself. Otherwise you run the risk of eating something dicey, then saying to girl you’ve just artfully lured into the bedroom, “You’re totally turning me on right now, I’m just gonna go to the bathroom for a second and drop a nuclear bomb on your toilet. If I’m not back in twenty minutes, call the cops.”

Ultimately however, the second date was a success. We finished our movie, did some more celebratory kissing, then eagerly planned our third evening together. Being an experienced dater, I knew full well what a third date meant. For two dates, you’re a gentleman, on the third date all bets are off. Staying over, making out, nudity – all on the table for date #3. You don’t end third dates with a polite kiss on the cheek, you end them with enticing, romantic, possibly erotic things whispered into each other’s ears as you head toward someone’s apartment. Usually. Our third date ended like this: 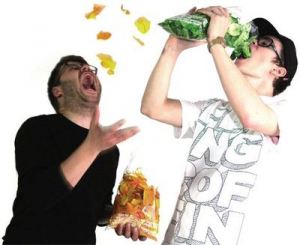 Tami: They keep asking me, “so what crazy thing did Chip Boy do next?”

Tami: They love it. Man, did they laugh when I told them about you.

It seemed that the lovely Tami had regaled her friends with the story of the valiant Chip Boy, who took girls to movies, then shoveled bags and bags of potato chips into his mouth in the comforting darkness. But that was not where it ended…

Tami: And then when I told them about the water bottle and you not eating dinner, they just about lost it!

Tami: I was a party the other night and people kept coming up to me and saying, “are you the one who went out with Chip Boy?!” It was hilarious.

Me: It sounds hilarious.

Tami, apparently, found several things about me very, very funny. 1) I brought a water bottle on our date and drank from it. A water bottle not unlike this:

that millions of people have and drink from on a daily basis. 2) When she ordered dinner on our first date, I declined, saying I couldn’t eat anything on the menu because of allergies. And 3) I went to a movie with her and ate a bag of chips. Her friends loved these outlandish tales so that they dubbed me Chip Boy, and eagerly awaited the next edition in my legendary saga. 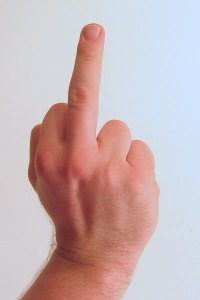 Look, I get it. We all talk about our dates with our friends and make little jokes. Some of us even talk about those dates online and make rather big jokes. I’m down with that. But when it gets to the point of needling nicknames and untold thousands of people walking up to someone at a party and laughing about the crazy bullshit said date did, that’s going a little far. At least a little far to tell me about on our third date.

Me: Well, you know I just brought the chips because I’m allergic to a lot of things so I have to bring something along with me in case I get hungry, right?

Tami: Sure, but it was just a joke. Don’t be so sensitive.

Me: I don’t mind, I guess. It’s just that, those things aren’t really…funny. They’re just kinda…things.

Tami: God, you are so delicate. Why don’t you try not taking yourself so seriously?! 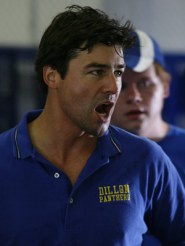 And that’s when the yelling started. Not by me, as confrontation is significantly unpleasant enough for me that yelling is reserved only for my cat, and my super, after my super has left the apartment. But holy shit did she start yelling at me. Apparently I was being a jerk, not laughing at her jokes about me. Not just a jerk, I was being “stuck up,” “boring,” “selfish,” “sensitive” AND “insensitive” simultaneously (which is hard to pull off), and, of course, “lame.” And Tami felt it necessary to make sure everyone in the bar knew about it. (Now I know why Coach Taylor was so pissed off all the time.) Finally, just as I thought she was wrapping her diatribe up, Tami pushed it one step over the line.

Tami: Gosh, you must not be a very good comedian if you can’t even laugh at yourself.

You can say I’m a lot of things, but don’t for one second think you’re going to say I’m not funny and get away with it. At that moment I got up and walked out of the bar, uninterested in whether or not Tami was behind. When I got outside it was clear that she was, and she expected a cab hailed for her. Because, above all else, she was a lady. I stuck out my hand, and when a car service pulled up instead of a cab, she objected. “You don’t think I’m actually gonna take a shady town car, do you?” I answered her question with another question.”There’s an option to end this date as fast as humanly possible and you’re going to turn it down because it’s not the right kind of car?!” Tami looked at me and nodded. I wished her goodnight, hopped in the car and drove off. Chip Boy out.

In retrospect, I know that Tami meant well. She was trying to do that playful banter thing that couples do, when they josh about the goofy things they did on their first dates. She just misjudged the appropriate timeline for such a thing by…maybe…seventy-five dates. But it stung a bit. So when she texted the next day and, as a form of apology, said “I guess I drank one too many gin and tonics last night, huh?”, I couldn’t resist responding. A forgiving person would’ve said, “don’t worry about it, and best of luck.” What I said was, “yeah, maybe you should get yourself a water bottle.”

This entry was posted in It's Not a Match Classic. Bookmark the permalink.

13 Responses to INaM CLASSIC: The Girl Who Called Me Chip Boy