How is This My Match: Polygamy Edition

Finding someone legitimately attractive in my recommendations from OkCupid is rare. Hell, finding someone with a visible human face is rare. So this week, when a truly hot young lady appeared in my Quiver Matches, one was both single and in the Los Angeles area, well, I didn’t know what to do with myself. Throw a parade? Call the cops? It was just that shocking. Of course, what I should’ve done was read her profile in her entirety, but I was far too scattered for such a reasonable move. I mean, have you ever tried to read with a parade going on and the cops banging on the door? Distracting! But as always, my pain is your pleasure, so once again it’s time to tell me…

How is This My Match?!

I’m trying to be more discreet with the photos, but I think you get the idea. She’s pretty damn cute. Glasses, curls, nice little figure – for once Cupid wasn’t drunkenly shooting his arrow into the crowd. And then…I read her profile. Hidden, deep down, below a rambling passage about her hometown and what her parents do for a living I found this little ditty…

Self Summary: I’m in an open, committed, ethically non-monogamous relationship with a documentary / commercial director and sketch comedian in Chicago.

Uh…what? WHAT?! Normally when I say “WHAT,” followed by both an exclamation point and question mark, a move referred to as The Excquation in the INaM editorial offices, it’s because I’m shocked at the bizarre and unjust world that has appeared before me. But in this case I’m genuinely confused. What the christ is an open, committed, ethically non-monogamous relationship? Is that what they were doing on Big Love? I don’t know, I never made it past the pilot. It sounds to me like a highly intellectualized way of saying “I’m in a long distance relationship, so I’m allowed to screw around.” Which is totally fine, and actually a pretty sensible way to do the long distance thing, but WHY ARE YOU ON A DATING SITE?! (Exquation.) And why, on said dating site, have you listed yourself as single WHEN THEY HAVE OTHER OPTIONS?! (Exquation #2.) Wouldn’t “seeing someone” be a more appropriate title for your ethically non-monogamous blah blah blah? And most importantly of all — WHY IS OkCupid RECOMMENDING YOU TO ME! (Exquation #3. Call Guinness.)

[I met him] last year through OKC, and now we are each other’s primary partners. On our first date, we talked about life, the universe of non-monogamy, and everything – even as the restaurant closed and the staff cleaned the tables. (Either they didn’t want to bug us, or we mortified them.)

The only thing better than finding out that someone who’s piqued your interest online isn’t single is finding out exactly how amazing it was when they met the person who made them not single. Even the waitstaff found your love entrancing! Isn’t that nice. You know you’re talking to a bunch of single people, right? Single people who’ve turned to, of all things, a computer to find romance? Single people who right up until this moment were planning to woo you? You may want to reconsider your approach.

But she wasn’t finished…

Since that night, we’ve fallen so hard for each other. He’s prone to silly voices and great ideas, as am I. Our relationship is built on more honesty and communication than I’ve ever experienced, and I’m changed every day by it. I want to be a better person – and I wasn’t even that bad to begin with. It simply amazes me the ways I’m growing, the things I’m learning, and the deep, honest connections I’m making. People travel all seven continents to soul-search, but an even bigger journey can take place within.

I’m sorry, are we at summer camp? Are you my twelve year-old pen pal? Why are you telling us about the dreamy boy you’ve met and how he’s made your life oh so sweet and wonderful? Not only have you found the perfect mate, but with him you have the perfect relationship? Save it for the next time you’re doing someone’s pigtails. The rest of us are trying to find a date.

Thanks, OkCupid, for suggesting someone who can make me feel bad on so many levels.

I mean seriously, How is This My Match?! 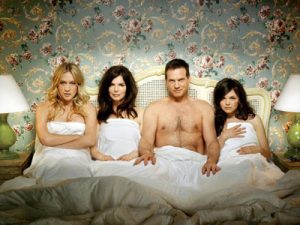 9 Responses to How is This My Match: Polygamy Edition