What Not To Say in Your Dating Profile

I’ve always been reluctant to advise people on how to construct their dating profile, because there’s really only rule: be yourself. If you’re funny, lean on humor. If you’re an intellectual, don’t be afraid to talk about books, or politics, or…pipe smoking. Whatever it is intellectuals talk about. And if you’re looking for something real and substantial, a genuine connection with someone you could be with for a long time – say that too. There’s no point in beating around the bush or soft-selling your wants from the dating world. If you were putting up an ad looking to buy a piano, you’d say exactly what kind of piano you want and what you were planning to do with it, right? Well why do anything different if your ad is looking for a mate? Or, you know, a mate who happens to be a piano. Just make sure your profile sounds like you, gives the reader a good idea of who you are and what you’re looking for, and you’ll be fine. The only thing you can do wrong is, well, everything else.

1) Saying the same bullshit everyone else says.

2) Saying new bullshit that no one else is crazy enough to say.

The first one is more common, but the second one is so much more fun. I will try to catalogue some examples I’ve encountered of each, to serve as a handy example of what not to do in your profile. As I only look at female profiles a lot of these will be lady-centric, but I’m sure men are just as unoriginal/insane – so women, please feel free to post your least-favorite profile moves in the comments below.

So, here we go. Under no circumstances should any of the following appear in your profile…

1) “Looking for a partner in crime.” The only crime we’re going to be partners in is your eventual murder if I have to read this on Match one more time. I know you’re trying to be cute and spunky, but it’s reading more “kooky aunt who never updates her material” than “flirty soulmate.”

This is what you are missing without TV!

2) “I don’t own a TV.” You might as well say, “I send bombs through the mail.” Look, it’s totally fine not to be into TV. You wouldn’t be a good match for me, but hey, thank your lucky stars on that one. Why you don’t own a TV is beyond me, I mean, don’t you want to watch the news? Like if something breaking or major happens. Or what about “Here Comes Honey Boo Boo?” Don’t you want to watch “Here Comes Honey Boo Boo?” But saying in your dating profile that you refuse the presence of a TV makes it sound like you’re trying to make a point out of it, and, well, that’s a really annoying point. And a little creepy. Unless you’re specifically eager to eschew the attention of modern media fans, just leave this one out.

4) “I love to laugh.” Everyone loves to laugh, that’s why it’s laughter.

5) “I love listening to music.” Oh, well then do we having something in common!

6) “My friend is filling this out for me.” Have you ever gotten one of these? Where the girl is unsure about Internet dating so her friend filled out her profile and will screen all the message before passing the best ones on to her? Yeah, that sounds like something I want to get involved in, an Internet dating version of telephone. And let me ask you this, if she’s uncomfortable filling out a profile, how is it gonna go when we have to actually go on a date? I have two guesses: bad and also bad. 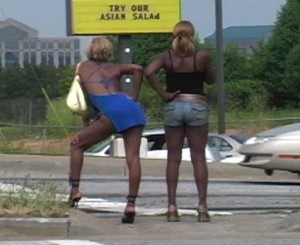 8) “I need a guy who’s cool with my birds.” He doesn’t exist. Might as well take down the profile, because nobody – guy or girl – is gonna be cool with your birds.

9) “Know the difference between you’re/your and they’re/their/there.” I get it, grammatical error are annoying, but what does this line accomplish? Is anyone reading your profile, saying to themselves, “Well, I really don’t know the difference between you’re and your,” and deciding not to write? No. So say this instead: “I find intelligence in a man to be really sexy.” Some message, better delivery, and hey, I’d totally respond to that. So, you know, you’ve been warned.

10) “I’m a total (insert sign of the Zodiac).”  It’s probably not fair, but in my book, Astrology = Crackpot. Anytime a girl gets into the whole “I’m, like totally an Aries, and I’ve found I get along great with Capricorns!” business, my eyes just start to glaze over. If you really, truly, deeply need a guy to be a specific sign, find a subtle way to ask when his birthday is via email. Then…get your head examined.

I could go on and on, but then I’d be guilty of the deadliest profile sin – boring the crap out of my reader. So please, if any of these adorn your page, scrub asap. And if there’s any I’ve forgotten, post them below.

37 Responses to What Not To Say in Your Dating Profile