Received one of my all-time favorite emails today. From a Vlad507104, with no picture, but any woman named Vlad has got to be a looker, right? (S)he writes…

Are you online now?
I am so sorry I don’t remember you reply me or not but please write me
asap…

This website sucks, they killed my account, so I had to create a new one. Write me to lapalady2010@gmail.com. I will send you my photos and we can communicate properly. Have a good day!

Really, Vlad? I feel like we could communicate just fine within the confines of this Internet dating site, what with its security protocols and ability to weed out creepy scam artists. Why would we want to leave? And no, I don’t think I sent you a reply before, mostly because you’re obviously insane and there’s no way I’ve ever spoken to you. Also, I have no idea what a lapalady is, but I’m worried that if I Google it my computer might get syphilis.

So that’s my awful email of the month, how are you guys doing? Let’s see who the medal winners were in the newest addition ooofffff….Awful Story Olympics!!!

From JS in Newport Beach, CA, a report on her first Internet date ever…

1. He lost some points earlier in the day because he texted me saying he forgot his nice collared shirt at home, so he would be dressed really casual. We just met up for happy hour after work, so nothing too fancy…but come on! Try a little.

2. He showed up and I had to hold back laughing because he was probably 50lbs heavier than his photos make him appear. And 8 years older.

3. And then he ordered a Bud Light.  I should add, we met at a brewery.

He never had great chances, but those three really did him in.

I forgot my nice shirt.

I love this one, because it tells us a little about the guy and a little about the girl. JS, who is a loyal reader, and how can you not love loyal readers, got a tough draw on the first two points. I mean, if you’re gonna show up 50 pounds heavier and eight years older than expected, at least bring a nice shirt. A crisp collar can totally take three years off. Well, it can’t, but have a little dignity.

Docking points for the Bud Light though, is a little tough. I know, I know, you’re meeting at a brewery, and a Bud Light is an objectively douchey thing to order (what, spell check doesn’t recognize “douchey”?) at a brewery, but give the guy a break. It’s hard enough to find someone who you’re attracted to and don’t actively want to murder to care too much about what they have to drink, right? Unless they order a Long Island Iced Tea. Then it’s over.

From Marie D in Louisville, KY…

I got this amazing message from one “Jonadre.” Subject: “Something a lil different…”

How are you doing?

I know this is a bit unconventional as an icebreaker, and please forgive me if this is not your scene at all, but do you enjoy playing with unusual and exotic yet deliciously tactile items? I have a suggestion you might find arousing…would you like to hear – even if its only to smile at it?

Ps. you have a wonderful womanly effulgence about you…

Marie didn’t send a picture of Jonadre, but after a bit of digging I believe I found it.

Apparently his follow-up email asked her to put the lotion in the basket. Was the “unusual and tactile item” a human skull by any chance? Because complimenting someone on their “womanly effulgence” is exactly the sort of thing you before you kill them and make a lady suit out of their skin.

And now, for the gold…

Brace yourself, Olympic readers. After tallying the votes from our judges (me and my cat), we have a first for the Awful Story Olympics.  In an unprecedented turn of events, Marie D from Louisville has won both the gold and silver medals! She’s like the Michael Phelps of awkward Internet dates. How could such a thing happen? Read on…

I spent last year in Geneva, Switzerland, and decided to try OKCupid to meet some new people. One day I met this 34-year-old (I’m 25) Chilean guy at a cafe. I should have known he would be pretentious: his message to me had said, “Distinctive feature: I will be reading Bukowski.” He had NO sense of humor, and was pretty condescending. But I decided to stick it out (for the story! always for the story) and suggested we go to a nearby pub to watch the Brazil-Chile World Cup game. Conversation was a little easier over two pints, but almost as soon as we got there, he had made friends with this other Chilean guy, and decided to go across town to a Chilean bar to watch the second half of the game! Again, I just went along for the ride, for the amusement mostly.

At the Chilean bar, he came back to our table with a beer and empanada for himself, and for me… an orange juice. Like I’m 8 years old or something. And fifteen minutes later, he stood up, said he had to go to work, and left – leaving me with Chilean guy #2 (who was very emotional about the Brazil-Chile game, and actually punched a chair when Chile lost).

Needless to say, we did not hang out again.

Ridiculous Things He Said That Evening:

I asked if he was planning to travel during his vacation time: “Well, let’s see. I’m single, I’m full of cash, and I speak five languages – yeah, I think I’m gonna travel.”

He had a third-shift financial/investment job, working with the US stock market, etc, and he said he had been hired with no prior experience or training. “Maybe it’s because no one else wanted to work third shift, ” I said, teasing. He replied: “Uh, no, maybe it’s because I’m highly intelligent, speak five languages, and have great computer skills.” 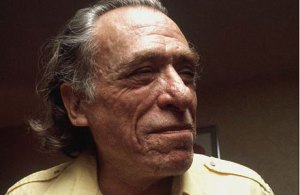 Bukowski, quietly agreeing that his readers are assholes.

Totally awesome. How can I not give two medals to someone who went out with a guy whose distinctive feature was reading Bukowski? If I was writing a script about a jackass, I couldn’t have a character say that because no one would believe that anyone is that much of a jackass. I’ve tried to convince myself that orange juice is a cherished and romantic drink in Chile and he was making a very sweet gesture that Marie ignored, but then I read, “well, let’s see. I’m single, I’m full of cash, and I speak five languages – yeah, I think I’m gonna travel,” and I give up. Can’t do it.

If you’d like to be included in next month’s Awful Story Olympics, email me!