How is This My Match? Elvira Edition

I thought OK Cupid didn’t recommend people! Oh, how wrong I was. Their version of Match’s Daily 5 are called “Quiver Matches”, where I suppose you can find people who either make you quiver with anticipation or are such perfect pairings that they must have been hit with an arrow from Cupid’s quiver. Both explanations are vaguely gross, and neither come even close to living up to the women I’ve had suggested since returning to the site. I’ve only been dabbling in the OKCups waters for a month or so, and already I’ve been presented with enough ridiculous matches to keep us in How is This My Matches for years to come. (Please don’t let me be writing this for years to come.) But who do we start with? Who’s the most…quiver-worthy?

I think you’ll agree….really, How is This My Match? 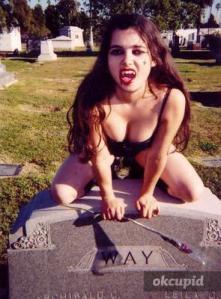 All I can think is of a plucky young man from the Way family, after a few bad years of meeting the wrong people in bars and getting trapped in a few dead-end relationships deciding, “what the hell, I’m gonna give Internet dating a try.” He’s heard good things about OKCupid, so he decides to sign up and take a look around. “What’s the worst that can happen?”, he asks himself, as he confidently clicks on the first picture he sees…

“Holy shit! That girl is sitting on my grandfather’s tombstone! And she’s dressed like a vampire!”

And then poor Timmy Way never Internet dates again. Or, in all likelihood, even turns on his computer. All because one young, voluptuous vampiress was trying to make a big impression in her dating profile.

I have no idea why Elvira was recommended to me. She’s the right age, and the right location — that’s an impressive start. And I like horror movies. Though I don’t mention that in my profile, and even if I did, I wouldn’t say that a fondness for scares means you’re turned on by chicks in coffins or knife-to-tongue phallic symbolism. But maybe I’m being too harsh. Maybe her profile is normal, and totally validates OKCupid’s romantic suggestion?

My Self Summary: Vampire mistresss.

What Are You Doing with Your Life: I’m acting in movies.

Of course you are.

You know, when I saw the picture of you straddling a grave with a bloody mouth, I had a feeling you were into kinky stuff. Then when I saw that other photo of you running a gigantic knife along your tongue, I wasn’t so sure. I mean, who isn’t turned on by tongue knives? So I’m glad you wrote you were into kink here, just to clear everything it up.

The First Thing People Notice About Me: My eyes and hair and my weird clothes.

Yeah, it’s your eyes that they notice. Handy rule of thumb: if you’re wearing vampire teeth, that’s always gonna be the first thing anyone notices.

And by far my favorite response…

I Spend a Lot of Time Thinking About: Hot guys.

I don’t know, there’s just something so comforting about Elvira spending all her time thinking about hot guys. It’s just so…normal. I expected her to say “Rasputin,” or “Cyanide,” or “The Time I Accidentally Killed a Man,” but no, it turns out she just thinks about hot guys. Like any one of us might. That’s sweet. When I read that, I saw a glimmer of what OKCupid must have been thinking when they named her one of my Quiver Matches. (Still gross.) But then I realized, well, I’m not really a hot guy. Oh well. Too bad she doesn’t spend a lot of time thinking about average guys with hilarious blogs. Then we’d really have something.

As is, however, I’m still left wondering…How is This my Match? 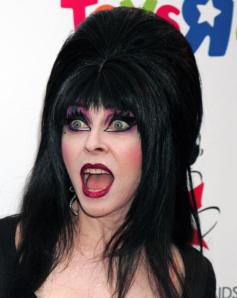 7 Responses to How is This My Match? Elvira Edition